Posted by Mrs. Bettie Need on April 12, 2012
Whenever I go to yard sales and flea markets, I always look for interesting pillowcases, since some of our granddaughters love to make skirts out of them. They cut off the bottom seam, turn the edge under, stitch, install elastic, and voila`: an instant play skirt.
Recently, I found some pillowcases with ruffles at the opening edge and wondered if there might be something I could make out of them besides skirts. So I experimented with the Girls Simple Gathered Shift pattern. Here is a photo of three pillowcases I had found. 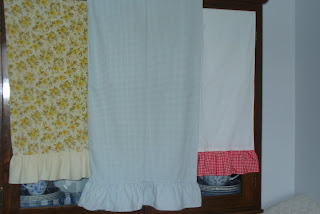 First, I checked out all my bias tape colors on hand to see what would be the best for each dress. I thought the white one with a red ruffle, and the yellow print with cream ruffle would be easy to make into dresses for 2 to 4 year olds, depending on the length of the cases. The blue check was from a king sized pillowcase, and looked almost too plain for an attractive dress. 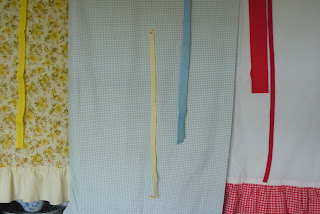 Then I placed the pillowcases on my dining room table and cut off the stitched bottoms. 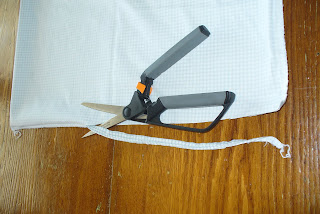 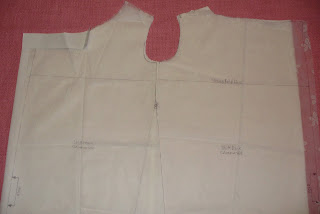 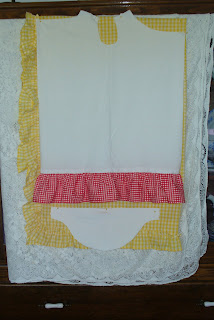 The photo at left shows the red/white dress laid over a yellow ruffled curtain for contrast. I hope to make a larger dress out of the curtain.)
I cut the yellow print dress using the red and white dress as the pattern.There was not enough of the yellow print left to make sleeves, so I may make that one a sleeveless dress that can also be used as a jumper. 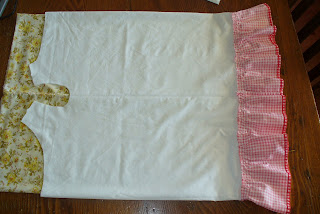 Since I like doing the hardest chores first instead of my favorite chore, I decided to start on the pale blue checked dress. It was the king size pillowcase, so I made it large enough for a 5 year old, and was able to get sleeves, too. When I placed the GSGS pattern over the blue check, I was able to make it 30 inches long to fit a size 5. 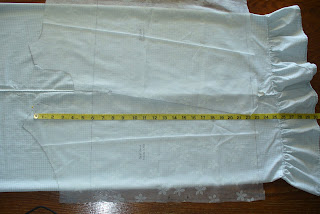 After cutting out the dress, I used the remnant to cut two sleeves on the fold. 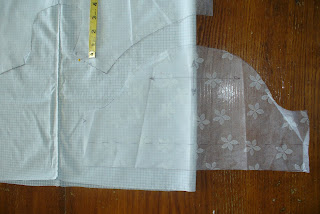 You can see how much longer the blue is compared to the yellow. 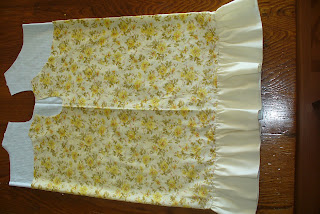 I had decided on a pale yellow bias trim for the blue check dress, since the blue was such a pale check; but it did look too washed out. Until-- I found some scraps from one of my skirts that worked great as a second tier ruffle above the blue check ruffle. After adding a pocket from my skirt scraps, the dress looked better than I ever thought I could make out of that plain old checked pillowcase! 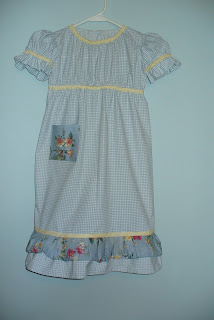 It is a great satisfaction making a “silk purse out of a sow’s ear!” Some days I think I will just throw away all my “quilt scraps” in that big bag of scraps I keep in the laundry room– but then again, I would lose all those wonderful possibilities of making a lovely dress out of an old pillowcase! Or curtain!
Speaking of curtains-- the ruffled curtains make wonderful petticoats or bloomers! Have you tried making a peasant blouse out of the GSGS pattern by simply cutting off the top to the blouse length you want? (BEFORE you cut out the pattern, fold up the GSGS pattern piece to the desired length for a blouse, plus hem allowance.)
Please share any other ideas for using the Girls Simple Gathered Shift Pattern! 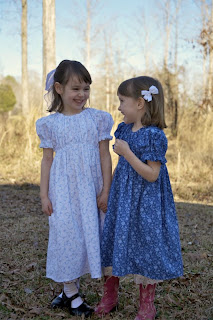 I made these dresses for my granddaughters from a pattern my daughter created just for me! I'll be offering ready-made dresses with both short and long sleeves in sizes 2 to 10. I just wanted to share a sneak peek. These are really cute over pantaloons (which I'll also be offering). The dress on the left has a regular empire waistline; the one on the right has a high empire. Belle gives her dress a twirl to show off the skirt! The bodice backs are gathered, too. This little cowgirl got a fit of the giggles when we took pictures! Side view, showing the puffed sleeves with self-ruffle. This pattern gives a beautiful Regency/Jane Austen era look but in an easy-wear format. Elastic casings in the neckline, waistline, and sleeves make this garment one even a toddler can pull on (no buttons or zippers!). Eventually, I'll be offering this as an ePattern you can purchase for instant download if you'd like to make your own dresses. Stay tuned! All photographs by 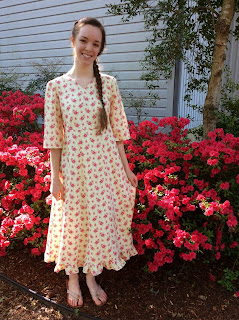 This is our beautiful, classic house dress, an original Practically Pretty design. It has 6 gores in the skirt, a feminine, ruffle, 3/4 sleeves, and a V-neckline. Do you have any special wardrobe plans for spring? Blessings! 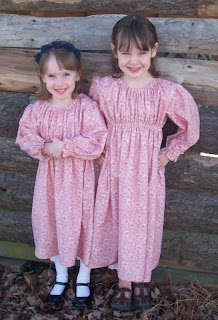 My daughter just made these matching dresses for her girls from the pattern she created for me. She hopes to finish up the pattern so I can offer it as an ePattern by early March. Be sure to check back!